The Strength and Bond of Women 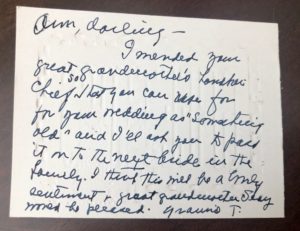 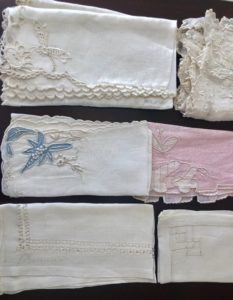 On National Women’s Day, I reflected on the courage of women, in general, and in my ancestry, how each was, in their own way and circumstances, courageous and impactful.

As an example, in this note written by my great grandmother, Florida “Flo” Bayard Seay Tracy, to my mother, Ann, for her wedding, “GrannieTracy” passed along “something old” – a handkerchief belonging to my 4th great grandmother, making the fabric today @160+ years old – and asked my mother to one day give it to the next bride. The second note, also written to my mother, was from Grannie’s daughter, Ellen,(“Aunt Ellie”) both women who I knew and loved. 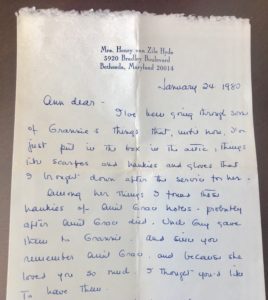 Their notes are reminders of the bonds women share and the courage, support, and love they can hold and spread, to themselves, families, communities, and generations following.

“Grannie Tracy,” born in 1880 in Rome, Georgia, was brave in many ways, one being to live outspokenly in a world she couldn’t hear. Though deaf since her early twenties, she communicated as well as anyone I knew. She read lips and spoke eloquently. She stated, jokingly, that she often learned more from a church sermon than people who could hear it. Her choice word, “darling,” and her gentile, graceful manner yet strong sense of feminism I can still hear and feel today.

Grannie Tracy was also brave when, after graduating from Shorter College in Rome, majoring and excelling in music, she called off her engagement to a local man to marry her true love, my great grandfather, James Grant Tracy, who she met at Cornell University while visiting a girl friend, a Cornell student. Eventually moving from her native Southern state, she settled with James in Syracuse, New York. 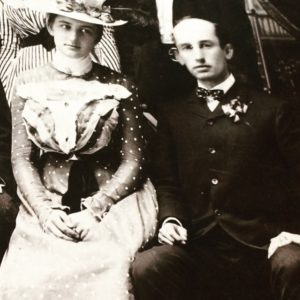 An outstanding writer, historian, and genealogist, who consistently and exhaustively tried getting her work published, her short stories speak vividly of her childhood as the daughter of Rome’s mayor (John Seay), owner of the Coosa River Boats Company, veteran of the Civil War (as were her two older brothers), and the strong woman who raised her. One of Flo’s stories explains the loss of the family’s largest boat, by flood, recalling her father’s discouragement upon returning home after learning the news but her mother’s resiliency springing into action to get him and the family right back on their feet. 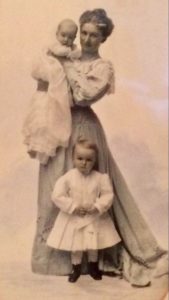 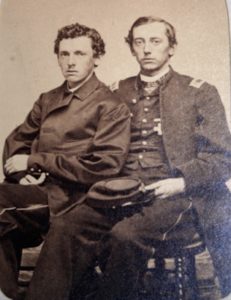 Grannie herself would one day see her youngest, son, Ted, serve in WWII, landing on Iwo Jima day two. No doubt Grannie kept these handkerchiefs close at hand during those years. 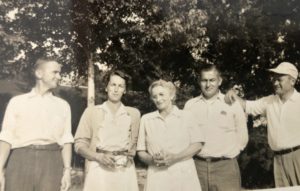 After the death of her husband, Sarah raised four sons’ as a single parent, losing the youngest at age 6 to Diptheria, the same year James died. Sarah required James Jr., Osgood and Will to study and work hard, and they grew to be responsible, young men. Sarah was, as recalled in letters and her obituary, a conversationalist with a sharp memory and well liked by younger generations. Both an “outdoorswoman” and “excellent horsewoman,” at age 97, six weeks before her death, Sarah rode her two favorite horses some distance herself. Throughout her life, she was passionate about flowers, especially exotic European ones.

Sarah’s daughter-in-law, (my second great grandmother) Ellen “Nellie” Sedgwick Tracy – whose stepmother was Women’s Suffragist, author, and abolitionist, Deborah Gannett Sedgwick, of Boston – made an impact, too, in the lives of women. 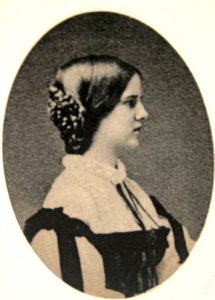 As her obituary states, she was “an original trustee of the Women’s and Children’s Hospital, later known as Syracuse Memorial. She was former president of the institution and became an Emeritus Trustee. In addition, she was head of the employment bureau at the Home for Aged Women.”

In her early twenties, she spent a great deal of time in Washington, engaging her interests in the abolition movement. Her father, two term N.Y. State Representative Charles Baldwin Sedgwick, was a staunch abolitionist, who refused to leave Congress until every slave in every state was free. (He was first to give a speech on the House floor in 1860 denouncing slavery, and years earlier represented white men whom freed from jail an enslaved runaway man who had been imprisoned). Though Nellie herself did not serve in Congress, as women were not allowed, she was alongside her father in the city, House and at the Naval Academy, for which he codified laws. She assisted the war effort in helping to raise funds for a new Navy vessel, the USS Onondaga. And on January 31, 1865, Nellie sat beside her father in the House when the Thirteenth Amendment to the United States Constitution passed in the House abolishing slavery and involuntary slavery. 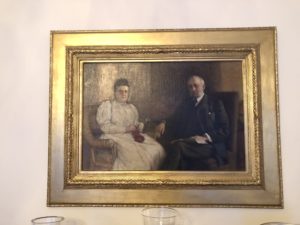 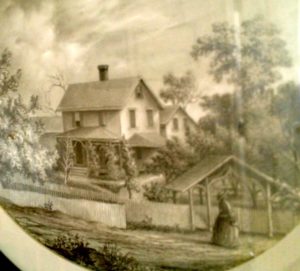 Circling back closer generations, my mother, Ann Livingston Tracy Burrows, the most important woman in my life who I will miss and honor each day I live, hopefully instilling the valuable lessons she taught me in my life and three sons’, was a teacher. She supported my father before he could practice law, and though not financially after that, in all ways until the day she died.

My father’s mother, Gertrude, my “Nan,” oversaw a maternity ward, delivering and taking care of babies at both the hospital and at home. She taught me at an early age to enjoy baking, and being a breast cancer survivor, that women sometimes must lose their breast(s) in order to save their lives. 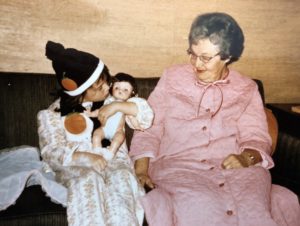 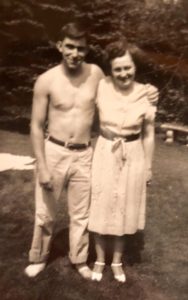 My maternal grandmother, Loretta, (below) I never had the chance to know, but I don’t doubt she was brave. She married Granny Tracy’s youngest and fourth child, John Bayard Tracy, and raised their three children during the Depression while my grandfather, who graduated from Cornell University, worked night shifts shoveling coal into furnaces at Crucible Steel and in time off and other periods, coffee into bags for the O.V. Tracy Coffee & Co. family business founded one generation before. My grandmother, mother, her brothers, cousins and friends helped, too, with the company. 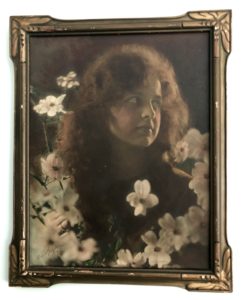 In 1962, during the Cold War, Loretta suffered a parent’s worst nightmare; her youngest child, “Johnny,” age 25, was killed while co-piloting a Secret Air Command mission back from Russia. After the Air Force messenger delivered a telegram to my grandparents’ front doorstep, I imagine these handkerchiefs were put to use all too well. 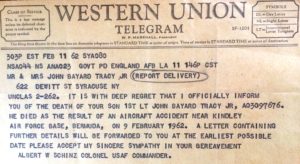 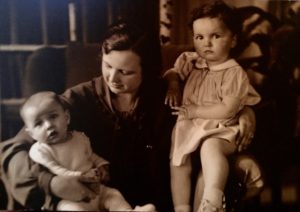 The loss must have been difficult, to say the least, on my mother, especially being 8 months pregnant (with my brother, John). And four and a half years after (17 months before I was born) at the age of 61, my grandmother died, after a battle with alcohol, which perhaps she thought might ease her pain. Though she lost that fight, in my eyes, she was a courageous and beautiful woman. 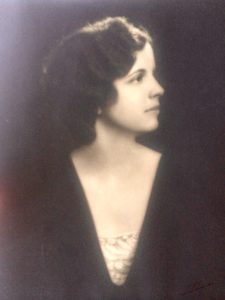 The above stories are a small window into four generations’ of women in my family, colored like stain glass before me. I am grateful for the love, courage, and example these women passed on. I think often on the hardships and strength many of them must have had watching sons serve in wartime and the military.

I think, too, about the love I feel for women relatives today, such as my Aunt Barb, and Betty, my cousins, Dawn, Sharon, Whitney, and second cousins, Tracy and Julie, my four sister-in-laws, mother-in-law, four nieces, and my cousin’s wife, Toma, my mother and father’s cousins’ etc. still with us today. And those second aunts to me, sisters of my grandmothers’ and great grandmothers’ who were so wonderful in each of their own ways. I loved the gatherings we had.

I am grateful, as well, for women friends and neighbors, many of who are like family, and a woman who is like a second mother to me, Sue Beeching.

In closing, cheers to women everywhere who are “fighting the fight,” whatever battle and/or dream it is, trying to make a difference in themselves and others, and helping educate those following their lead.

Though my mother, grandmothers, great grandmothers and great aunts are no longer here on Earth they are and will always be women who are very much with me.

I dedicate this story to my beloved Grannie Tracy, Aunt Ellie, and my mother. I am grateful for the amazing women they were and the lessons theytaught. Granny Tracy is especially with me when I write. One day, I plan to publish her stories, for her, and of course, look forward to passing on the handkerchief!

My mother with her best friend, The Waldheim Dock, Big Moose Lake 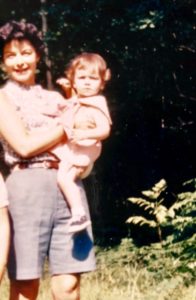 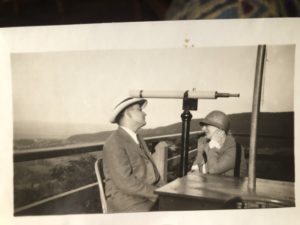 Grannie in Europe w my grandfather 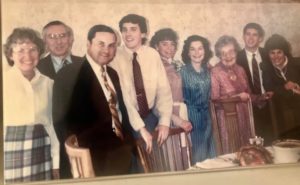 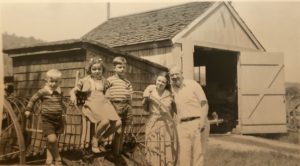 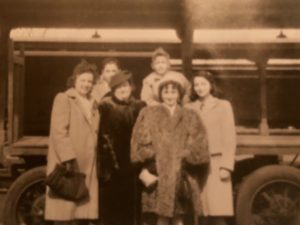 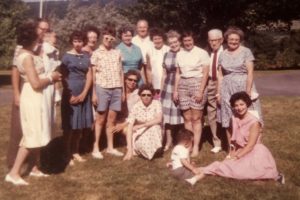