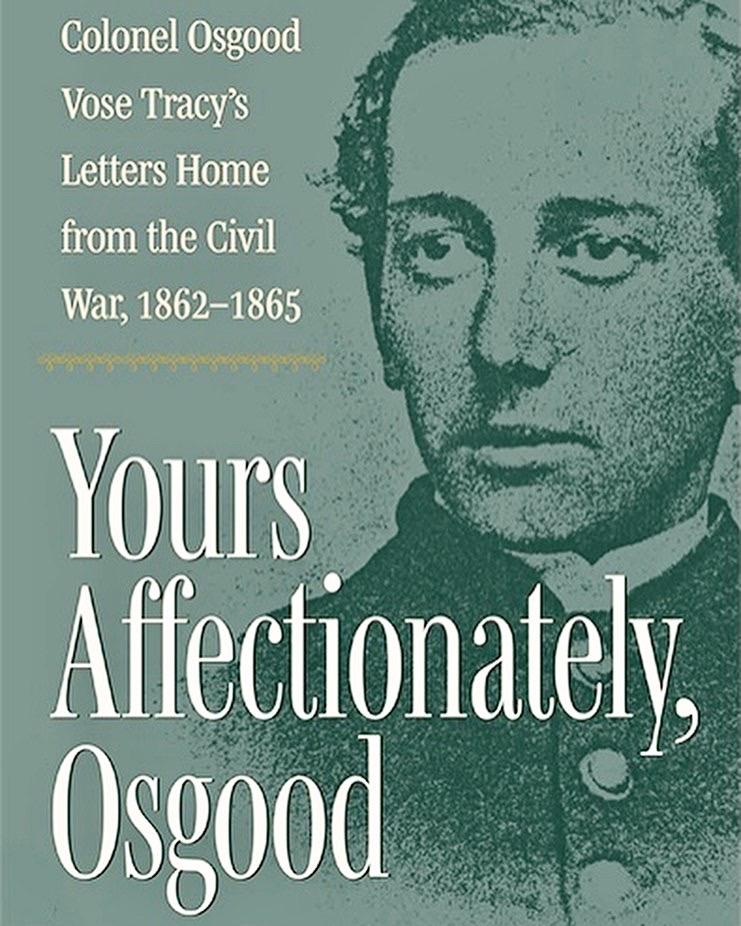 “These wartime letters from a Union army officer to his mother, interspersed with his later accounts of the battle of Gettysburg and his capture at the battle of the Wilderness and subsequent escape, describe a range of soldier experiences: camp life, marches and battles, bonding with comrades, the highs and lows of morale, and homesickness. The reader will emerge with a broadened understanding and appreciation for the service and sacrifices of Civil War soldiers.”

​The letters in “Yours Affectionately, Osgood”, primarily written to his mother, provide a uniquely detailed perspective of everyday life in the Army of the Potomac, adding considerably to the existing literature on the experiences of citizen soldiers in America’s Civil War. A well-educated young man, Tracy offers his opinion on pressing social and political issues of the time, including his definite abolitionist sentiments; ruminates on the Union war effort and its campaigns; and demonstrates his deep commitment to family, as well as his sweetheart, Nellie Sedgwick, back home. Tracy’s letters constitute an incredibly rare primary source volume that will be both fascinating and foundational in the scholarly community and for more general interest readers of the history of the Civil War.

“Tracy’s letters provide excellent content from which even experts will glean information and insight to the experiences of Civil War soldiers through the unique perspective of a staff officer. Tracy is around all the Sixth Corps big wigs, giving a taste of life in this reliable Army of the Potomac corps. The inclusion of correspondence from the home front adds an uncommon feature to most soldier letter books.”

“From bad food and boredom to the horrors of Gettysburg and his escape from a Confederate prison, Osgood Tracy’s missives bring the reader into the beating heart of the bloody conflict that defined our nation.”

"Sarah, You captured the years of Ryan’s life perfectly in the poem! I’m sure all moms' and dads' reading this relate and have tears in their eyes. I know I do!"
Stephanie Carafotes Serpa
Yoga Instructor
StephanieCarafotesSerpa@gmail.com
So excited for you and love what you've posted!
Patti Mielnicki Barbalich
Mother, Early Childhood Education, Teacher  - Patti Mielnicki Barbalich
patti-mielnickibarbalich@gmail.com
I can't wait to read FIGHTING FOR NELLIE all the way through!
Katie Tortorello
Founder  - The Write Direction
katie-tortorello@gmail.com
I'm hooked! That's great. Can't wait to read it!! Wow, Sarah, we are all so impressed!!
Laurel Ingraham Fitzmaurice
Self-employed Editor
laurel-Ingraham-fitzmaurice@gmail.com
Sarah, can't wait to read more.... Keep stepping up and out!
Pam Mellor Guyer
Founder, Living HIPP  - Managing Director, BeautyCounter
pam-mellor-guyer@gmail.com
Really looking forward to this read.
Ingrid Van Slyke
PSA, Artist, Teacher
Ingrid-van-slyke@gmail.com
Love!!! Have the chills - what happens next?
Carleen Strudas Rivers
Yoga Instructor
carleen-strudas-rivers@gmail.com
Let me know when you get this published, I can't wait to buy it! I'm so proud of you.
Janette Robinson Harrington
janette-robinson-harrington@gmail.com
This is wonderful!! Thanks for sharing!
Barb Hanlon
United Healthcare Group
barb-hanlon@gmail.com
Wow! Love it! For some reason Kevin Costner is narrating this to me! More, more, more!!
Lauren Gold
Excel Orthopaedic Specialists and New England Sports Orthopedics
lauren-gold@gmail.com
Sarah! I'm so impressed! Can't wait to see it on the NY Times Best Seller list!
Catherine Daley
catherinedaley@gmail.com
What an amazing accomplishment!
Carol Stuart
Test Position  - Test Company
carolstuart@gmail.com
Brings a time from the past alive. I am reminded of the feeling I had reading The Diary of Anne Frank. This work is fabulous. A real reminder of what came before in order to make today what it is.
Suzanne Crocker
Artist, Who\'s Who in the World  -  www.suzanne-crocker.com/
suzannecrocker@me.com
A great story with original documentation never before printed. Readers love the Civil War. The author has absolute passion and dedication.
Eleanor Herman
New York Times Bestselling author, historian, host, History Channel, National Geographic  -  eleanorherman.com
Well written and Osgood is around the big wigs of the Sixth Corps.
Patrick A. Schroeder
NHP and Civil War historian  -  Appomattox%20Court%20House
A wonderful narrative, based upon a large collection of letters, detailed and historically interesting.
Howard R. LaMar
Former Yale University Dean and Professor of History  - Yale University
Exciting, suspenseful, and extremely well-written. I love this story! It has war, loyalty, death, jealousy, and love, which every good war story needs. Great characters - the important Sedgwicks - friends to the likes of Hawthorne and Alcott. War generals and heroes. "Feminists." The juicy part of this story is whether or not Osgood's love will be there to embrace him when he returns home.
Donna Moreau
New York Times Bestselling Author, historian  - Waiting Wives: The Story of Schillng Manor, Home Front to the Vietnam War
"Tears reading your poem! Being in the thick of it with a 2 & 4 year old and then seeing graduation signs all over town and prom photos on FB it all seems so far away for me but I know it will go fast!"
Katie McClain
Mother, Marketing  - Katie McClain
KatieMcClain@gmail.com
Your heart is on the page. So real. I could hear your voice as I read. So sweet and true.
Jason Marsh
Artist, Designer