LUCKY – Life with my Dad 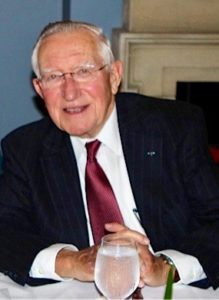 My father, William Platner Burrows, today a resident of Manlius, New York, often tells my two older brothers, his seven grandchildren and I that the number seven is lucky. For many reasons, I believe it is, too.

To begin, Dad was born Aug. 7, 1930, in Syracuse, New York. It was a Thursday, his father’s day off from the office. Dad is the oldest of two. His sister, Barbara, was born four years later on the same date, Aug. 7, though I wrestle with whether that was lucky for them. Dad and his sister, who each have seven letters in their three names, grew up on Fayette Boulevard. Dad loved playing in the nearby fields and spending time “shooting the breeze” with his best friend, Jud Johnston, who lived across the street.

As a young teen, an incident occurred when my father was crossing a road; a traffic light fell on him, breaking his nose. Dad was lucky, as the situation could have been worse and I have always thought the slight swerve Dad’s nose takes is a cool piece of what comprises his story.

We have learned from stories Dad enjoys telling us that his childhood was a bit mischievous. At some we laugh, others gasp. The latter I will leave out but in general, Dad liked to fish and shoot off the .22 rifle his father, Floyd, born in 1876, gave him on his 16th birthday for “sticking with the clarinet.” Dad’s father was a doctor who had an office open five days per week but seven days per week made house and hospital calls. When Dad borrowed the family car, he made sure to check in often with his father in case he needed it for a call.

Dad’s mother, Gertrude, born in 1903 and a registered nurse in Labor and Delivery at Crouse-Irving Hospital, where she met Dad’s father, from time to time received phone calls about Dad from the school principal and neighbors, but thankfully my father turned out just fine. For all the innocent trouble Dad caused, he worked that much harder — such as shoveling heavy snow quickly from the driveway in the dark so that his father could leave for a call and working various jobs, including caddying at a golf course, logging hours at his father’s office and heavy construction.

In 1952, Dad graduated from Hobart College and in 1955 Syracuse University Law School. The next thing Dad did we all agree he was most lucky for and that was marrying his high school sweetheart — Ann Livingston Tracy — the epitome of “sweetheart.”

Back home after two years stationed with the Army at Fort Bragg, North Carolina, with Mom teaching school there, Dad worked his way up the ladder in the local law world. I recall many nights after dinner he sat for hours at the kitchen table, making notes on his yellow legal pad. Dad never complained about the workload; in fact, he seemed to like it, saying there was never a day he didn’t want to go to work. For that, he is lucky.

Over the years, Dad’s hobbies, many with Mom by his side, have included playing football and lacrosse, running track, skiing, canoeing, learning to fly fish, attending Syracuse University football and basketball games, buying fresh fruits and vegetables at the farmers market, attending the Syracuse Symphony, museums, volunteering legal services for community associations and church, enjoying food (dating back to the love of his mother’s baked goods and Sunday roasts), building things with his sons such as a red race car (with No. 7 painted on it) and lean-to, taking boat rides, reading newspapers and books, listening to music, hiking, walking and “puttering around, keeping busy.”

As daughters often do, I have always and do look up to my Dad. When I was 3 years old, my parents were building their camp on Big Moose Lake in the Adirondack Mountains. That summer we tented on the property. There, many mornings, in the fresh air near the covered well, I watched Dad shave. My job was to hold the mirror for him. He was up early, dressed in his khaki pants, stained with turpentine, white T-shirt and work boots, ready for the day.

He smelled of fresh shaving cream, which he had mixed with his favorite soft bristle brush in a cream-colored mug and then, with a circling motion covered his cheeks with before running the razor in parallel, smooth strokes, as I watched, thinking in awe, “That’s my Dad!” When finished, Dad tapped his cheek with his index finger and leaned toward me, suggesting I “plant” a kiss on it. I was always quick to do so.

Every Friday evening each summer after Dad would return to the lake from Syracuse after working the week. I would often wait for him a quarter-mile from camp, sitting on the tall rock around the curve at Punky Bay, with the tall pines overhead and to each side blueberry bushes from which I picked and ate, smiling once I heard the sound of his car tires moving over the gravel of the Crag Point Road, knowing then that he was near.

When I was 10, in the summer of 1977, Dad rowed for me in the four-mile “Lake Swim.” Dad rose at 5:30 a.m. before the sun broke, woke me, and made hot chocolate, filling it to the top of the Thermos. Along with the Thermos, he packed Hershey chocolate bars and several towels. At the door, Mom, wrapped in her long, pink bathrobe and looking sleepy, gave me a hug and kiss, wishing me luck.

In the fog of South Bay, Dad drove us off by aluminum boat, heading to West Bay, where approximately 40 swimmers and I soon jumped into the water. After completion of the first mile, I took occasional breaks by holding on to the side of the boat while Dad handed me the Thermos cup from which I sipped, feeling the hot liquid warm my cold body, and pieces of Hershey bar, which re-energized me. Back I went to swimming, the majority of the time using the breaststroke, keeping my head above water.

I don’t recall Dad talked a lot, though I might have. Dad meant business. He didn’t want me distracted. I did well until about three-fourths of a mile from the end at Clark’s Point. My left leg had gone heavy and I was dragging it along in the water. Feeling exhausted, I said, “Dad, I can’t go any further.” I wanted to get into the boat, but Dad wouldn’t let me. He thought I’d come too far and that I could push on. I realized Dad was right when I finished the swim, and is the reason I could be proud that I did and was the youngest person then to date to do so.

Today, my Dad is still my hero. He sacrificed to provide for my brothers and me, our mother, and to plan for our future. I am thankful for the lessons Dad teaches, among them work hard, don’t whine, save for your retirement and give back. As Dad says, “There’s no free lunch.” I like, too, that Dad has a special presence, booming voice and sense of humor.

“Grandpa sure has some ‘zingers!’” his youngest grandchild, our son Andrew, exclaims.

People of various ages often tell me they enjoy speaking and spending time with Dad and I know that he enjoys their company.

For me, this Father’s Day is more special than others before. It is the first one that I let Dad know how much I appreciate him without my mother by his side. When Mom passed Feb. 15 of this year, a large piece of our hearts and spirit left with her. But in thinking of how much my Dad loved my mother, and she him, I am comforted. There wasn’t a morning I remember while growing up that Dad left for work when he did not kiss Mom goodbye, or upon his return in the evening.

The last time Dad kissed Mom goodnight, the evening before she died the next morning, was Valentine’s Day. They were blessed with 70 years together, and though there is never enough time and it is extremely painful for all of us to go on without Mom — especially Dad — I want my father to know that not only did he, and does he, do a great job taking care of his three children, our spouses and his seven grandchildren, but he took great care of Mom, beginning to end.

Every year on my birthday, Dad tells me that I am his and Mom’s “frosting on the cake.” Well, I think Dad is the candles’ spark. Dad lights up our family and those who know and love him. For so many reasons I am proud of, appreciate, and love my father. I am lucky to be his daughter.

— Sarah Winch is a resident of Wenham.