In her recent book, Sarah Burrows Winch ’90, P’25, under the pen name Sarah Tracy Burrows, shares a collection of private, family letters written and sent home by an ancestor during the Civil War, providing personal accounts of the war and time.

Yours Affectionately, Osgood: Colonel Osgood Vose Tracy’s Letters Home from the Civil War, 1862-1865, with a preface and epilogue by Winch and context and analysis provided by historian Ryan W. Keating, gives insight into the life of a soldier in the volunteer 122nd New York Infantry Regiment, through letters home between September 1862 to the end of the war in May 1865. In addition, included are letters written to and by Tracy’s younger brother, William Gardner Tracy, who also served in the war and was a recipient of the Congressional Medal of Honor for his part during the Battle of Chancellorsville.
“I felt strongly that the letters should be published and the story be told in film, and I wanted to be the one to make that happen,” -Sarah Burrows Winch ’90.

Osgood Tracy, Winch’s maternal, great, great grandfather, shares his thoughts on political and social movements of the time, such as the Union’s war efforts and the abolitionist movement, in addition to his commitment to his family, including widowed mother, Sarah Osgood Tracy, and his sweetheart, Nellie Sedgwick.

Winch says the reason she wrote the book came from Tracy’s own request to his mother. “I trust you stow all my letters away in my chest for I wish to preserve them,” Tracy says in a letter from Sept. 30, 1863.

As a young child, Winch’s maternal grandfather shared the letters with her, building her interest in Tracy’s life and history in general.

“When I about 10 years old, I actually experienced an ‘epiphany’ moment which I still recall to this day, standing next to my grandfather as he talked about the stories,” Winch says. “I felt strongly that the letters should be published and the story be told in film, and I wanted to be the one to make that happen.”

“These wartime letters from a Union Army officer to his mother, interspersed with his later accounts of the Battle of Gettysburg and his capture at the Battle of the Wilderness and subsequent escape, describe a range of soldier experiences: camp life, marches and battles, bonding with comrades, the highs and lows of morale, and homesickness. The reader will emerge with a broadened understanding and appreciation for the service and sacrifices of Civil War soldiers,” says James M. McPherson P’93, Pulitzer Prize–winning author of Battle Cry of Freedom. Winch met McPherson through her friend, Cynthia “Cricket” Allen ’92 who is friends with McPherson’s daughter, Jenny ’93.

The book can be purchased from Kent State University Press, Barnes and Noble or Amazon. A portion of the book’s proceeds will go to preserving Civil War battlefields, along with the Wounded Warrior Project.

Winch is the president of the Jacob Leisler Institute for the Study of Early New York History. At William Smith, she graduated with degrees in English and history. She is married to Peter Winch ’91 and the couple has three sons, Ryan, Alex, and Andrew. Andrew is currently a sophomore at Hobart and William Smith Colleges and is the sixth in the Burrows and Winch families to attend the college, including his grandfather, William P. Burrows ’52, P’85, P’90, GP’15, GP’25, who along with his wife (Winch’s mother) Ann Tracy preserved the letter collection after Ann’s father died.

For more of Winch’s work, including photography, visit sarahtracyburrows.com.

In March 2022 Sarah was elected president of the Jacob Leisler Institute for the Study of Early New York History, named for her 8x great grandfather, by its’ Director and Board of Trustees. Sarah had been a trustee since 2019 and Chair of Steering.

She follows in the footsteps of Dr. Firth Haring Fabend, who was president since the institute was first organized in 2014. 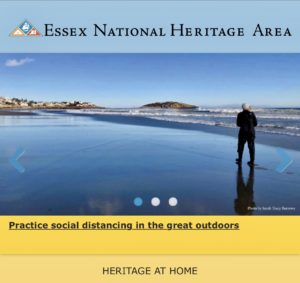 In addition, Sarah’s photograph “Heading to Play” was chosen as a 3rd Prize Winner in the 2019 National Essex Heritage Area photography contest in the category “People of Essex County.” Her photograph of the Essex River was one of 9 photographs that won in the NEHA 2019 Instagram contest. 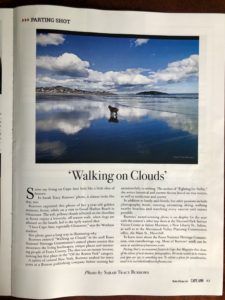 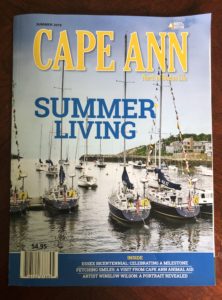 “Some say living on Cape Ann feels like a little slice of heaven.
In Sarah Tracy Burrows’ photo, it almost looks like that, too.
Burrows captured this photo of her 3-year-old golden retriever, Scout, while on a visit to Good Harbor Beach in Gloucester. The soft, pillowy clouds reflected on the shoreline as Scout enjoys a leisurely, off-season walk, when dogs are allowed on the beach, led to the aptly named shot.
“I love Cape Ann, especially Gloucester,” says the Wenham resident.
Her photo goes a long way illustrating why.
Burrows entered “walking on Clouds” in the 2018 Essex National Heritage Commission’s annual photo contest that showcases the living landscapes, unique places and interesting people of Essex County. The shot was an instant favorite, earning her first place in the “Off the Beaten Path” category.
A native of Central New York, Burrows worked for many years at a Boston publishing company before turning her attention fully to writing. The author of “FIGHTING FOR NELLIE,” she writes historical and current fiction based on true events, as well as nonfiction and poetry.
In addition to family and friends, her other passions include photography, music, running, swimming, skiing, walking nearby beaches and watching every sunrise and sunset possible.
Burrows’ award-winning photo is on display for the year with the contest’s other top shots at the National Park Service Visitor Center at Salem Maritime, 2 New Liberty St., Salem, as well as the Merrimack Valley Planning Commission office, 160 Main St., Haverhill.
To learn more about the Essex National Heritage Commission, visit essexheritage.org. More of Burrows’ work can be seen at sarahtracyburrows.com.

I am very pleased to have been elected and to assume the post as a trustee of   The Leisler Institute, whose mission is to preserve the records of and promote the study of the early period of New York history between the period of the English takeover of New Netherland in 1664 and the American Revolution.

The nonprofit research and study center, devoted to Colonial New York under English rule as well as the permanent home of the Papers of the Jacob Leisler Project, serves scholars and students of this important 99 year period in our country’s history. The Institute is located in Hudson, New York.

I am a direct descendent of Jacob Leisler (8x granddaughter) through his daughter, Hester.

Sarah’s photograph, Walking on Clouds, was recently chosen for First Prize in the category, Off the Beaten Path, in the 2018 Essex National Heritage Photography Contest.

Her photograph, Church Steeple, was chosen out of 450 entrants as a winner in the 2018 Essex National Heritage Instagram Photography Contest. 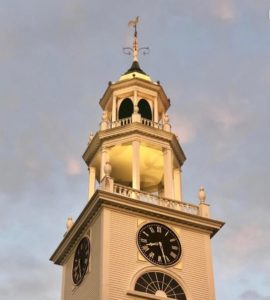 An awards ceremony and exhibit will take place on Wednesday, February 27, 2019 at 5:30 at Hunt’s Photo and Video in Melrose, Massachusetts, where her and the other 10 winning photographs will be displayed for one year, as well as at the National Park Service Visitor Center in Salem (2 New Liberty Street, Salem, MA 01970) and at the office of the Merrimack Valley Planning Commission (160 Main Street, Haverhill, MA 01830).

The contest was by presented in partnership with Hunt’s Photo & Video, the Merrimack Valley Planning Commission, and the National Park Service at Salem Maritime and Saugus Iron Works National Historic Sites. 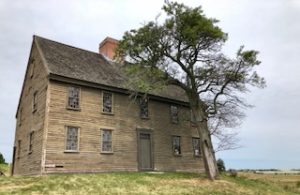 IG Essex Country Massachusetts asked if they could include the photograph I shot Saturday, September 8, 2018 of the 250 year old Choate House, situated on the 135-acre Choate Island (also known as Hog’s Island) once part of the large early 20th century summer estate of Chicago industrialist Richard T. Crane, Jr. The photograph can now be found on their site: @igessexcountrymass. The movie, The Crucible, was filmed here and on the island, which is part of The Crane Wildlife Refuge, owned and managed by The Trustees of Reservations. The Trustees Instagram Account manager stated of the photographs I took: “Love all your pics! Thanks for the visit!” You can find this photo and others in my Photograph section or on my instagram account: @sarahtracyburrows

Latest News. I am currently collaborating with Civil War historian, author, and San Bernandino University associate professor, Ryan Keating, PhD, on a nonfiction manuscript based on @220 letters written by my 2nd great grandfather, Colonel Osgood Vose Tracy, 122nd NYSV, during his service in the Civil War, as well as those written by his younger brother, Medal of Honor recipient, Captain William Gardiner Tracy, 122nd NYSV. Dr. Keating will be attending national historian and Civil War conferences in April and May where he will be speaking to university press editors and publishers about the manuscript, which is near completion.

Pleased to be one voice in One Hundred Voices Volume III An Anthology by Centum Press. Included is my short story “Asking for a Puppy,” entwining a young girl’s longing for a dog and the healing discovery she makes, journeying through life, that all things seem connected. To order paperback or hardcover, use my author and 10% discount code: 100V3-13 on Amazon. Thank you!

Featuring new and experienced authors from around the world who write in many different genres and styles, the book provides a exposure to dozens of authors…